“The demand for excellent animated content , animators and VFX illustrators is constantly on the rise with top animation studios like HMX Media, NY VFX Waala, YRF, Red Chillies, Sumo Video Games Pixar, Disney, DreamWorks and others churning out quality content on a massive  scale the animation industry is scouting for fresh and dynamic talent to cater to the ever-increasing demands.”

Our missions is to adapt to change and challenges by staying safe and staying ahead. Nothing can stop us.

Arena Animation – Tilak Road Pune students are the real champions and their names will always be etched in the Hall of Fame, where their accomplishments will inspire a whole new generation of students in the years to come.

Here is a list of our students who have made their mark in the Media and Entertainment industry by working in Hollywood and Bollywood movies as VFX Artist, Final QC Artist, Rigging Artist, Animator, VFX coordinator, etc.

Point to be Noted.

Point to be Noted.

Get in front of customers when they’re searching for businesses like yours on Google Search and Maps. Only pay for results, like clicks to your website or calls to your business.

Create your Ads in few steps

Adjust when you need

What are the different types of Google Ads

What is a CPC or PPC

Control your advertising costs, and get results – >Start Now

Google keeps working with you to improve your results. Their smart technology makes sure that your ads reach more of the right customers while staying within budget.

Step 3: Check what your competitor is posting. Visit Ubersuggest.com and search for content posting for your primary keywords.

Step 5:  Why Engagement is important than followers?

8 Blogging tips that will drive traffic to your social media platform.

The Rock & Roll Hall of Fame, a HubSpot customer, wanted to boost brand awareness and get more ticket purchases to their museum. Since they’d mainly used traditional customer outreach strategies in the past, they wanted to experiment with more ways of reaching audiences on social media.

Because the museum’s social media team recognized how often they personally used Facebook Messenger, they decided to implement a messaging strategy on the Hall of Fame’s official business page.

From the business page, users can click the Get Started button and open a chat with the Hall of Fame. Through the chat, social media managers were able to quickly reply to questions or comments from fans, followers, and prospective visitors. The reps would also send helpful links detailing venue pricing, events, other promotions, and activities in the surrounding area. 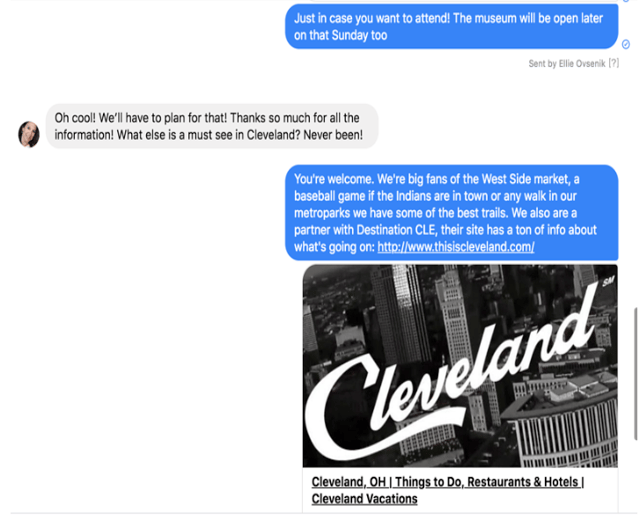 Since the Messenger launch, they claim to have raised their audience size by 81% and sales from prospects by 12%. The company claims that this feature was so successful that they even received 54 messages on an Easter Sunday.

Being available to connect with your audiences through Messenger can be beneficial to your business and your brand. While the Rock & Roll Hall of Fame boosted purchases, they also got to interact with their audiences on a personal level. Their availability might have made them look like a more trustworthy, friendly brand that was actually interested in their fanbase rather than just sales.

In early 2016, Buffer started to see a decline in their brand reach and engagement on Facebook due to algorithm changes that favored individuals rather than brands. In an effort to prevent their engagement and reach numbers from dropping even further.

The brand decided to cut their posting frequency by 50%. With less time focused on many posts, they could focus more time on creating fewer, better-quality posts that purely aimed at gaining engagement. For example, instead of posting standard links and quick captions, they began to experiment with different formats such as posts with multi-paragraph captions and videos. After starting the strategy in 2016, they continued it through 2018.

Here’s an example of one an interview that was produced and shared exclusively on Facebook.

The Results: By 2018, Buffer claimed that the average weekly reach nearly tripled from 44,000 at the beginning of the experiment to 120,000. The page’s average daily engagements also doubled from roughly 500 per day to around 1,000.

Although Buffer began the experiment before major Facebook algorithm changes, they updated this case study in 2018 claiming that this strategy has endured platform shifts and is still providing them with high reach and engagement.

It can be easy to overpost on a social network and just hope it works. But constant posts that get no reach or engagement could be wasted your time and money. They might even make your page look desperate.

What Buffer found was that less is more. Rather than spending your time posting whatever you can, you should take time to brainstorm and schedule out interesting posts that speak directly to your customer.

In 2017, HubSpot’s social media team embarked on an experiment where they pivoted their video goals from lead generation to audience engagement. Prior to this shift, HubSpot had regularly posted Facebook videos that were created to generate leads. As part of the new strategy, the team brainstormed a list of headlines and topics that they thought their social media audience would actually like, rather than just topics that would generate sales.

Along with this pivot, they also experimented with other video elements including video design, formatting, and size.

Results: After they started to launch the audience-friendly videos, they saw monthly video views jump from 50,000 to 1 million in mid-2017.

Creating content that caters to your fanbase’s interests and the social platform it’s posted on can be much more effective than content that seeks out leads.

While videos with the pure goal of selling a product can fall flat with views and engagement, creative videos that intrigue and inform your audiences about a topic they relate to can be a much more effective way to gain and keep your audience. Once the audience trusts you and consumes your content regularly, they might even trust and gain interest in your products.

In 2019, Major Impact Media released a case study about a real-estate client that wanted to generate more leads. Prior to working with Major Impact, the Minneapolis, Minnesota brokerage hired another firm to build out an online lead generation funnel that had garnered them no leads in the two months it was active. They turned to Major Impact looking for a process where they could regularly be generating online leads.

Results: Within a day, they received eight leads for $2.45 each. In the next 90 days, the marketing firm claimed the ads generated over 370 local leads at the average cost of $6.77 each. Each lead gave the company their name, email, and phone number.

Although these results sound like a promising improvement, readers of this case study should keep in mind that no number of qualified leads or ROI was disclosed. While the study states that leads were gained, it’s unclear which of them lead to actual sales — if any.

This shows how Facebook ad targeting can be helpful when you’re seeking out leads from a specific audience in a local area. The Minneapolis brokerage’s original marketing and social media strategies weren’t succeeding because they were looking for a very specific audience of prospective buyers in the immediate area.

Ad targeting allowed their posts to be placed on the news feeds of people in the area who might be searching for real estate or have interests related to buying a home. This, in turn, might have caused them more success in gaining leads.

The campaign began with a cheeky series of carousel ads that featured tasteful pictures of “baby-making places,” or locations where women might conceive a child. The later ads were a more standard format that displayed an image of the book and a call-to-action.

When the first ads launched in December 2016, they were targeted to female audiences in Germany. In 2017, during the later stages of the campaign, the standard ads were retargeted to women who had previously interacted with the carousel ads. With this strategy, people who already showed interest would see more ads for the free product offer. This could cause them to remember the offer or click when they saw it a second time.

Results: By the time the promotion ended in April 2017, ads saw a 35% increase in conversion rate. The company had also generated 10,000 leads and decreased their sample distribution cost by two times.

This case study shows how a company successfully brought leads through the funnel. By targeting women in Germany for their first series of creative “baby-making” ads, they gained attention from a broad audience. Then, by focusing their next round of ads on women who’d already shown some type of interest in their product, they reminded those audiences of the offer which may have enabled those people to convert to leads.

Source for above case studies – https://blog.hubspot.com/marketing/facebook-case-study

Agenda of the session

How Does Google Work ?

What is Search Engine Optimization?

Search engine optimization (SEO) is the practice of increasing the quantity and quality of traffic to your website through organic search engine results.

With your results, you can use the Keyword ideas page to:

Get forecasts and historical metrics for your keywords

With your results, you can use the Forecasts page to:

With your results, you can use the Historical metrics page

“Art is not what you see, but what you make others see.” – Edgar Degas

Matte painting, a practice started in the year 1907 by Norman. O. Dawn in the movie “The Mission of California”. Matte painting was painted on a glass for creating something which wasn’t possible such as in a movie “Star Wars” most of the scene in the movie were matte painted as building a set like that was next to impossible. To understand  how matte painting was painted or how it was used in movies one should definitely go through the video  Industrial Light & Magic – Traditional Matte Paintings (rare footage)

In the Matte paint, the word ‘Matte’ means blocking the image in the background that is some part of the scene was real and others were just painted on a glass cover and a camera was aligned in such a way that painting looks the part of the scene. To understand  how matte painting was painted or how it was used in movies one should definitely go through the video Industrial Light & Magic – Traditional Matte Paintings (rare footage)

“Titanic” was one of the last movies to use digital and then came Digital Matte Painting, the concept was the same but the difference was now, it was painted digitally. Christopher Leith Evans was the first person to paint matte painting on the computer. Lord of the Ring, Harry Potter, Narnia and even more are some of the best examples of digital matte painting.

Creating a Matte Painting Digitally not only allowed to create a matte paint fast and easily but also made it 3 dimensional to give a  more realistic look, Basic software that is used in filmmaking are Maya, Adobe Premiere, Adobe Photoshop and of course Nuke.

How to create a simple Digital Matte Paint

For creating a basic 2d matte painting we use Photoshop. It starts with an idea, a concept, what are the scene requirements.

Once all things are checked in the list now collect images as per the requirements. Images can be self-clicked or downloaded from the internet but it should have a copyright or else you will need a permission to use it.

It would be always easy if one starts with a making rough sketch since it gives an idea of what is to be created. Now import all the selected pictures and apply the mask on it and paint the required part.

Always keep a few things in while creating a matte paint-

Here is a  video example of creating a matte paint